“Bending Towards the Light – A Jazz Nativity” Composed by Anne Phillips and cited as “a new New York tradition” New York Magazine, the show is the Christmas story told through jazz and has featured such jazz greats as Lionel Hampton, Tito Puente, Paquito D’Rivera, and Dave Brubeck. The work is performed annually in New York. This year the show will again be at BB King’s on December 22rd.  It is also performed in many cities throughout the country.

The Kindred Spirits Children’s Jazz Choirs, an educational program for inner-city children that teaches them songs from the Great American Songbook and ends with concert performances in which they are accompanied by New York’s finest jazz musicians. Begun as a effort to introduce children to the songs of writers such as Duke Ellington, George Gershwin and Irving Berlin, the choirs have become even more important. Recent discoveries in neuroscience have confirmed that children surrounded by a variety of rich musical experiences throughout childhood develop extensive neural networks that build on in-born music-processing mechanisms. Introducing children to the right concepts at the right time makes learning more efficient.  Donald A. Hodges Oxford University Press This has been evident at The Juanita Ward Summer Reading Institute in Rye since the choir’s very inception twelve years ago. The choirs are also currently a part of the programs at the Madison Square Boys and Girls Clubs in Brooklyn and the Bronx, and Best Friends in Washington, D.C.

What Are We Doing To Our World? Also composed by Anne Phillips with book by Ms. Phillips and Tad and Beth Jones. The show is an empowering, exciting, and moving mixture of music: Gospel, Jazz, Latin, and Choral, combined with short pieces about the environment by such writers as Matthew Fox, John Muir, Mark Twain and Annie Dillard. The work inspires sustainable environmental awareness and behavioral change. It is a rousing opening to any environmental event.

SING! SING! SING! The Great American Songbook Sing-In which brings together people of all ages to lift their spirits by raising their voices in the glorious melodies and lyrics by the greatest American songwriters. Based on an event that has run for fifteen years in Los Angeles, SING! SING! SING! is running as a series at THE TRIAD in New York. 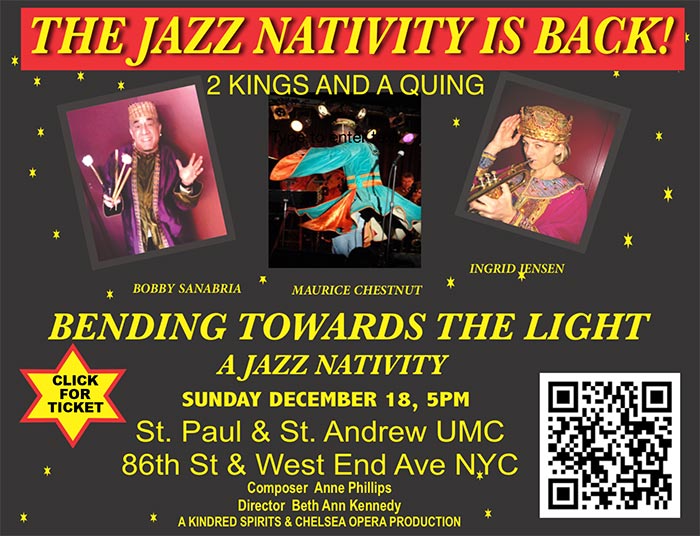